What Is CCLI and Why Should It Matter to my Church? 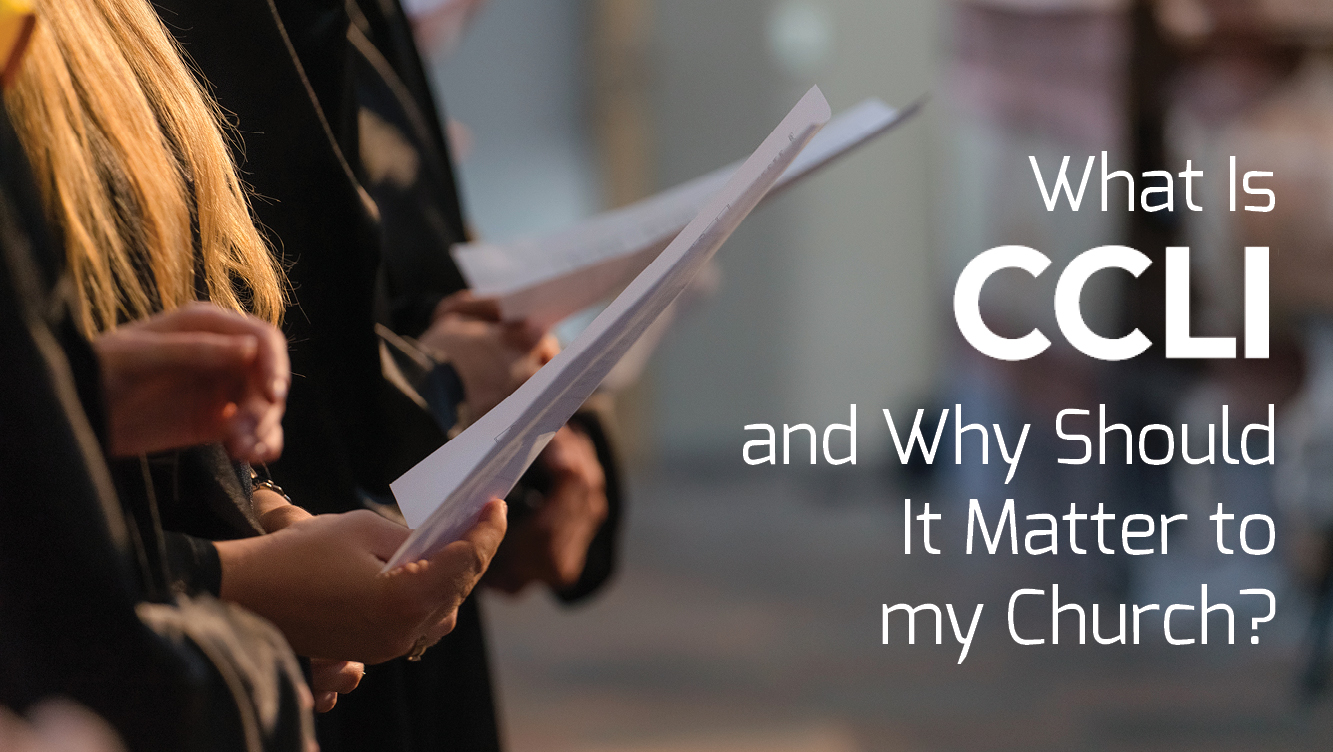 The Founding Fathers believed our country would prosper if those who created new things prospered.

So, in Article I Section 8, Clause 8 of the US Constitution, they gave Congress the power “to promote the progress of science and useful arts, by securing for limited times to authors and inventors the exclusive right to their respective writings and discoveries.” These exclusive rights are known as patents and copyrights.

Copyright protection begins when a new song is fixed in some reproducible format and extends for the life of the author plus seventy years, during which the publisher and the songwriter’s estate are entitled to receive royalties for a song’s use. [Registering the song with the US Copyright Office is a means of proving authorship and is required to sue another party for infringement.] After that period, the song goes into the Public Domain, where the song may be used free of charge.

How does this pertain to music used in church?

Let’s go back about 50 years to the beginning of the contemporary worship movement. Up till that point, most churches purchased pieces of choir music for each singer and musician and purchased hymnals for congregational use. The creators and owners of these songs were appropriately compensated from royalties from the sale of these resources. But starting with the youth revival of the mid-70’s, many churches began supplementing—or replacing—their choir music and hymnals with photocopied handouts and overhead transparencies that featured the lyrics to new worship songs. In spite of an explosion in contemporary church music, choir music and hymnal sales fell, and publishers and writers weren’t being fairly compensated for these new songs.

In their defense, some churches and religious organizations were under the mistaken impression that non-profit organizations were exempt from the copyright law. The reality is that—although churches and educational institutions are generally exempt from having to secure and pay public performance licenses (for the song to be used in a public setting)—photocopying and public display of songs without permission are illegal. Some music publishers reacted by suing churches who were violating laws against illegal copying (a very unpopular move). Some churches attempted to follow the letter of the law by trying to secure permission to copy each of the songs they wanted to use (a very arduous and time-consuming effort).

In 1984, a Portland, Oregon pastor heard there was a $3.1 million lawsuit pending against the Archdiocese of Chicago for copyright infringement. So he asked his minister of music, Howard Rachinski, to make sure their congregation was safe from liability. In 1985, Rachinski started a service where churches could secure blanket permission from certain publishers to copy their songs for specific non-commercial uses. He called the company Starpraise Ministries and signed up more than a thousand churches to this service, which was reincorporated in 1988 as CCLI. Since then, more than 250,000 churches worldwide have joined CCLI, which handles blanket licenses from more than 3000 publishers. In 2016, SESAC, one of America's top three performing rights organizations, announced the acquisition of CCLI.

CCLI provides blanket licenses so member churches can reproduce, display, rehearse, broadcast and stream songs. A congregation’s annual license cost is based on its size, and different licenses are available depending on the church’s needs. CCLI also offers churches the opportunity to search and purchase/download song assets from its SongSelect database of 300,000 worship songs on a per piece cost basis. Once about every two and a half years, each church is required to go online and report all the songs they use in a six-month period. CCLI tallies the usages—weighing them according to the aggregate audience—and pays the publishers, who in turn, pay the writers. With 160,000 member churches in North America alone, CCLI is now the number one source of income for many faith-based publishers and writers. For more information about CCLI and their various services, click here. There’s also another fine company called One License that offers churches—especially more liturgical ones—a similar service, albeit on a smaller catalog of songs. Click here for One License's site.

Discover Worship members occasionally ask if they need a CCLI license to use our materials. The short answer is that your Discover Worship membership gives you permission to make photocopies of the songs you download from our site, forward our song demos to your singers and musicians, and project our lyrics and videos in your worship services. If you want to use our songs on a podcast, on a radio or TV broadcast, through video-streaming and YouTube, or any other usage, a different license is required, and we encourage you to check with CCLI or One License regarding that.

If you only use Discover Worship songs (and there are some churches who only use our music), then technically you don't need a CCLI license. That said, you probably use music from sources other than Discover Worship. If you do, then the easiest way to legally obtain copying and display permissions is through CCLI or One License.

If you subscribe to CCLI and it's your time to report your song usage online, then we would greatly appreciate it if you would report Discover Worship songs by using the CCLI License number that's found on our downloadable sheet music and charts. CCLI will then aggregate your usages—along with those of hundreds of thousands of other congregations—and compensate songwriters and song owners for their life-changing music.

If your church is making unauthorized copies of music, we encourage you to choose a more loving (and legal) alternative…